Jeff Zandi and the Texas Magic Hall of Fame

Life has a funny way of sneaking up on you.

Jeff Zandi has passed away, and with his absence there will be a hole that can never be filled. Texas Magic will never be the same.

Throughout the history of Magic in Texas, Zandi has been pretty much the only constant. When I started playing competitively in 2003 he already had the respect of the entire community. It seemed to me he was the elder statesman of Texas Magic, and that he'd always been that way.

While he wasn't the founder of the Texas Guildmages, he eventually became the de facto leader after many of the other old-timers drifted away. Zandi never wavered in his passion for the game. The weekly Guildmage meetings at his house go back such an incredible amount of time it's hard for me to wrap my head around. Almost anyone who was anybody in Texas Magic in the 90s and 2000s drafted at his place at least once. Many went on to become full fledged members of the Guildmages under his guidance.

The Texas Magic community was fairly tight-knit for the first 15 years or so. Before the games player base doubled and doubled and doubled again in the late 2000s, you could show up to a PTQ and recognize over half the participants. Zandi probably recognized 90% of them. He might not have ever been the best player in the state though he played in 6+ Pro Tours. He was an very good judge and excellent TO. He created a sense of community, spotlighting the various players who were having success in the state in his weekly updates (wherever he ended up posting them).

This loss hits me hard. I've always been a fan of the history of the game, and I've done my best to learn from older players about the events that happened before I was around. I always hoped to one day combine my knowledge with Zandi's to create a Texas Magic Hall of Fame. I envisioned it as a tribute to the somewhat rugged and wild culture that seemed unique to Texas. The players who were legends but for whatever reason could never make the next step to the national or global level. The Judges and TOs who ran the events in memorable (thought not always good) ways. With this loss, I don't really know how I could recover that history he had in his head.

I do know that no matter what the criteria would have been for enshrinement, and no matter who would have been choosing inductees, there would only have ever been one as clearly deserving as Zandi. So perhaps for now I'll start the Texas Magic Hall of Fame with this inaugural class of one. He was Texas Magic, and it's hard to imagine it without him. 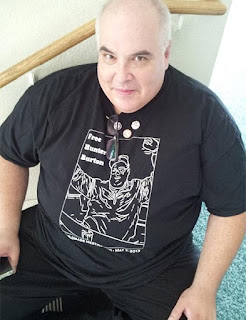 PS - This is a good article published fairly recently about Zandi on mtg.com. I'll update more as I find it.

Edit: Jeff's most recent article is here. You can find more by him in the archive. He wrote an incredible amount over the years chronicling the various meetings of the Guildmages.

Ty
Bryan, Texas, United States
Ty Thomason is a semi-pro Magic the Gathering player. Trying to set the record for most Pro Tours played while never cashing. @ceciliajupe on twitter